The RV is now parked along the street next to the loading corral for the S.S. Badger, a ferry that criss-crosses Lake Michigan between Manitowoc, Wisconsin and Ludington, Michigan.  The street sign beside the road reads “Overnight Parking Permitted.”  For the first time in a month, I have a few hours alone, with nothing I have to do, and nowhere I have to be, and fatigue has not yet overcome me.  The lake breeze blows through the screen across my legs, quenching the cabin heat from a long day’s drive in the sun.
Nearly a month has passed since I last recorded anything of this trip, and much has happened since then; I’ve done a lot and seen a lot and thought about a lot without having the time to write down anything.  About a third of the trip has gone undocumented, including the ultimate aim of the trip, The National Wildlife Federation trip to Yellowstone with grandson Blake.  After I went to Charleston to bring him back to Denver by plane, I was busy driving and making deadlines and doing whatever else needed to be done.  This upcoming ferry ride (Saturday, July 2, 1:55 PM), for which I made a reservation a couple of months ago, is the last deadline of this trip.  From here on, I plan to get there when I get there.


July 2, 2011
On the S.S. Badger, in the middle of Lake Michigan, land is not visible in any direction.  I am always amazed at the size of the Great Lakes.  I remember when I first saw one of the Great Lakes – I believe it was Lake Huron – and was amazed that water extended all the way to the horizon; land was not visible on the other side of the lake.  As a child, I was used to lakes that were visibly surrounded by land.

This is a coal-burning steamship, and the heavy, gray smoke drifts aft where most of the passengers are seated in deck chairs or around tables in open-air canteens.  I have moved four times trying to find a seat away from the inside heat but not in the smokestack’s down-draft, or in the din of a bingo game hosted by a loud, over-jolly, would-be comedian.
I watched as they loaded the RV onto the bottom deck through the maw of the ship.  This is the only ferry I’ve taken where others drive the vehicles into it.  It is certainly an act of faith to leave one's keys in the car and the door unlocked for several hours, in the parking lot and on deck.  It reflects both the honesty and the trustfulness of these Midwesterners – Michiganders and Wisconsonites - living on both sides of this huge body of water.  I believe this naive honesty is what I miss most about the Midwest of my childhood.
Posted by http://solowomenathomeandabroad.blogspot.com/ at 4:02 PM No comments:

It has taken me too long to load this next installment of the West-by-North summer trip. Sorry! No good excuse, just busy with other things since my return--including a two-week trip to Florida to visit former college and high-school classmates.  This has truly been a year on memory lane!


The trip from Iowa City to Rochester, MN, and the stay in Rochester (June 27 – 30), are a bit blurry in my mind, as I now try to reconstruct them in late October/early November.  The Sunday evening after the Writer’s Workshop, I didn’t drive very far north of Iowa City, but found a nice, out-of-the-way campground about halfway to Minnesota, spent a pleasant night there, slept late, cleaned out the RV, and did laundry. The next afternoon, I drove north across lush, green Iowa farmland, passing through Waterloo the day after Michelle Bachman made her triumphant presidential debut there. It’s easy to see why Bachman’s simplistic message appeals to the farm folks in this fertile countryside. North-eastern Iowa seemed as American as apple pie, like a Norman Rockwell painting. Complexity doesn’t strike a chord here,  nor does poverty (at least, not the type seen in large cities). Iowa is not a state with a large manufacturing sector, nor much of an immigrant population.  On the other hand, I did read recently ("Our Daily Meds" by Melody Petersen) that Iowans seem to have an undue affinity for prescription anti-depressants. Perhaps this has inhibited the reasoning required to deal with complex issues.
Once in Rochester, the Wal-Mart parking lot became home base. Marcia Yoder Brown (my sophomore college roommate) picked me up each morning and took me back at night, and I slept in the parked RV.  Marcia lives in a retirement facility (Charter House) at Mayo Clinic, where we ate and talked and visited with her friends. We had a wonderful two or three days wandering through the maze of Mayo’s clinics and hospitals and eating places. Marcia, who has recently suffered the loss of her husband to cancer, and has had a serious bout with cancer, herself, was as cheerful and upbeat as she always was. "She's everybody's cheerleader," said one of the staff members there. She arranged for me to give a talk on my trip to India, which drew a good audience, and—despite some anxiety on my part—went over well.
Marcia was one of two fellow students during my sophomore year at Kalamazoo College who probably saved my sanity when I suffered my first major depression. (The other person, who cheerfully visited me in my lonely basement dorm room, was Gretchen Falk.) I was taking a course overload, worked twenty hours a week, was chronically tired, and was carrying a torch for a former boyfriend. The second semester that year, Marcia invited me to be her roommate (hers had left at the end of the first semester), and her upbeat manner and enthusiasms began to color my melancholic mood a rosier hue; my mind had become so dark, I even contemplated suicide.
The Rochester, Minnesota stopover indeed revived my spirits from the trauma of the week at NJH and the subsequent drive from Denver to Iowa, as well as the frustration of knowing that I will probably have to do a radical re-write on the Korean travel memoir. 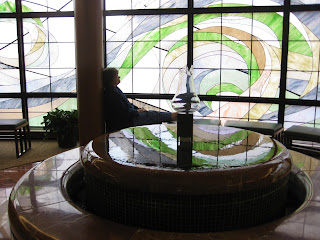 Posted by http://solowomenathomeandabroad.blogspot.com/ at 4:01 PM No comments: