On the second day of the Pipedreams tour (Tuesday, May 11), we visited five different churches in five different towns in Provence, all in the vicinity of Marseilles. This seemed like a bit of a forced march to me, as I’m used to taking vacations in a leisurely and exploratory fashion.


The first town was Barjols, and the church was the Collegiale Notre-Dame de l’Assomption. It was built into a town square, with commercial buildings sharing its walls. The interior was simple, but the organ was ancient, having been built in 1657 and restored in 1837. Several modifications were made in the later 19th and 20th century, but these were “reversed” in 1986, giving the organ its authentic functions and old, rich tone.

The second town was Saint-Maximin la Sainte-Baume, where we visited the Basilique Sainte-Marie-Madeleine (I’m not fabricating any of these names!). The organ was an Isnard organ, built during the last half of the 18th century, so another very old organ whose original pipes have all been preserved, despite several restorations. This is the legendary site where Mary Magdalene, with her brother, Lazarus, landed on a boat trip from the Holy Land and established a Christian colony. A reliquary contains a skull and shin bone, with the epithet: “Noli me tangere.” The crypt contains sarcophagi purporting to contain the remains of Saints Maximin, Sidonius, and Mary Magdelaine.
The next town on the itinerary was Roquevaire, and the organ was in the Eglise Saint-Vincent. It is a new organ, built in 1993, re-using some pipes. It boasts a total of 5,000 pipes and operates with electric action. The sound is huge and dramatic, and fills the large church with sound. Bell and percussion sounds chime from the high registers. John Claude played a storm scene on the organ that was almost overpowering.

The next town (the fourth) was Bouc-Bel-Air, where the Eglise Saint-Andre sported a much more simple organ, again a new one, completed in 2006. It is a small organ with a good sound (although tinny in spots).
The fifth and final stop for the day was in Aix-en-Provence, at the Cathedral Saint-Sauveur. Several organs have been installed in this cathedral, beginning in the 15th century, with the latest restoration in the early 21st century. Several master organists have had a hand in renovations and restorations, including Jean-Esprit Isnard and Aristide Cavaille-Coll, two famous French organ producers. The interior of the cathedral was very dark; the organist, Chantal de Zeeuw, played a piece by a female student of Cesar Frank. The cathedral itself is built upon the foundations of a temple to Apollo.
Again, the links to YouTube videos were done by Ian Cook, who took sound and videos of many of the organs and their churches. 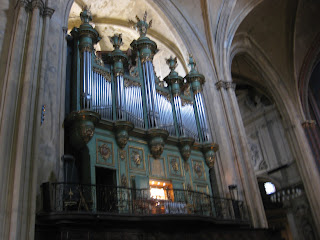 Posted by http://solowomenathomeandabroad.blogspot.com/ at 4:56 PM 2 comments:

Monday, May 10, 2010
The Pipedreams tour began in Marseilles immediately after several members of the group were picked up at the airport. We took a quick bus tour around the noisy, bustling city. The first of the three churches visited that day was the Reformed Church, Eglise St.-Vincent-de-Paul. It displayed two large organ cases, mounted on either side of the transept, as well as a choir organ (1948) in the apse. The main, historical organ (1888) had been out of commission for a while, but has since been restored. It was the first organ I heard, so I had nothing to compare it with, but it had a grand sound. The choir organ was not as rich or versatile.
One person in the group, Ian Cook, posted video and sound of several of the organs we heard on YouTube, and I have included links to some of these beneath captions.
After listening to the organs at the first church, we had lunch in a quaint library/lunch room near harbor, which was jammed with boats. The lunch, a nice salade Nicoise, was upscale, but we had an issue trying to get some salad (in a plastic container) to take out to our bus driver.
After lunch, we mounted the hill overlooking the harbor to the imposing Abbaye de Saint-Victor, a basilica that looks like a fortress and that apparently functioned for centuries to protect the harbor. It looms above the harbor, beside a nearby fortres--a statement in stone and strength. Much of the building was done from the 10th through the 14th centuries.

It is an ancient fortress-abbey. Pope Urban V (in Avignon) had once been abbot there and, as pope, fortified it further. It was also used by the Knights of Malta during and after the Crusades. I didn’t have change in Euros at the time to go down into the crypt, which houses remains of pre-Roman habitation, and I regret not seeing that. Apparently the organ in this abbey is a combination of old and new (1888 – 2009), and the sound didn’t seem quite as rich as that in the previous church, but its resonance in that old stone structure was body-penetrating.
﻿


The third church we visited that day was the Eglise Sainte-Marguerite. It was a modest church with a new organ (2003). The church appeared to be modernized from an older church, with bubble-décor windows and plain, painted walls. The paint was peeling in places though, and revealed evidence of painted (frescoed?) walls beneath.

Posted by http://solowomenathomeandabroad.blogspot.com/ at 12:20 AM 2 comments: