5/04/10 (cont.)
On the train from Lausanne to Milano. I had no problem catching the train, despite some anxiety ahead of time that I might not be in the right place at the right time. Also, I had a voice message from Guido (a former exchange student), asking me to call him, but it turned out he had sent it yesterday. We made contact today as I was waiting in the kiosk by the track (voie 3) for the train to Milano to arrive in the station.

5/9/10
The stay in Milano was lovely, but tinged with melancholy because I will probably not see that family again. I felt a great deal of love and acceptance – even honor – while there. The family is very strong, reflecting, I think, the general Italian culture. The two boys and their families live near Gianni and Rosanna, in the same complex of buildings. They work  in Milano, and that is one of the issues Guido has about the job. He and Patrizia have recently purchased a larger apartment in the same complex, which limits his options in terms of location for a new job. 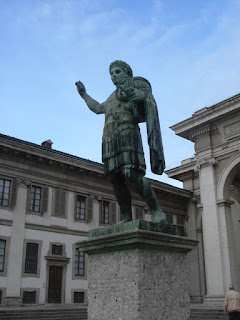 Although I had requested a quiet stay in Milano, Gianni and Rosanna wanted to take me to as many sights as time would permit. Perhaps it was for the best, because they both have lost a good deal of hearing, and quiet conversation might have been impossible. So we visited many fascinating, historic, and beautiful sites in the four days there. When I wanted to speak, I would tap Gianni’s arm and he would turn his best ear toward me and cup his hand behind it, I would speak loudly, and most of the time he could hear and understand. If I wanted to say something to Rosanna, I would usually go through Gianni, although if she said something to me, I could often respond directly to her, in Italian. Our conversations usually began with Rosanna directing two or three words to me in English, followed by “comme se dice…” and an Italian word, which I was usually able to translate into English, then she would continue in Italian, and I would respond in Italian if I understood what she said, which was often the case. 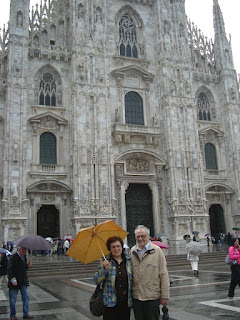 On the first day in Milano, we went to the center of the city and saw Il Duomo (the cathedral), and we spent a good deal of time wandering around the inside. It is a huge structure, with a central nave and two large side-aisles, nearly as large as the central nave. The chiaroscuro of the interior gives a feeling of mysterious calm. I had an auditory guide, which I used primarily when looking at the three large windows in the apse. They were designed in the 1500s, I believe (the cathedral was built from the 1300s to the 1500a) and contain over 400 panels, of which some 60+ have survived intact; the rest have been repaired or replaced. One of the windows depicted stories from the New Testament, one had scenes from the crucifixion, and the third showed stories from the Old Testament, with scenes of the Garden of Eden before and after the fall near the bottom of the window. 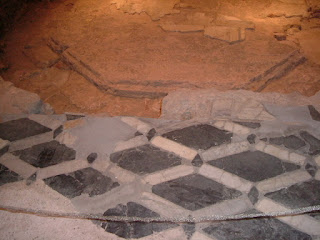 After absorbing as much of the art and atmosphere as possible, I turned in the audio-guide and bought a booklet of postcards. Then we went into an underground passage near the entrance of the church, where the excavated remnants of several previous religious structures lie buried beneath the square in front of the Duomo. There was a paleo-Christian baptistery in a round, Romanesque structure (third century?) and fragments of earlier and later buildings, including two other churches (San ? and San Giovanni) that had preceded Il Duomo. It was very interesting to see the false-perspective checkerboard (black-and-white) that seemed to characterize much early Christian design, both in buildings and on the clothing of bishops and other church officials  I remember many such illustrations on the walls of ancient churches in Bulgaria.
Posted by http://solowomenathomeandabroad.blogspot.com/ at 10:11 AM No comments: 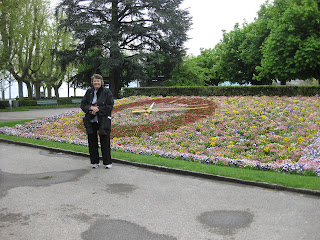 Yesterday, Mauricette and I walked down to Lac Leman and then took the metro up the hill to the area where she works. We had lunch at a nearby restaurant where she often eats. I ordered the “res de veau” which, she told me, translates to veal thymus. I thought it might taste something like sweetbreads, which I like. It was delicious. The meat was slightly crisp on the outside but soft inside, and was served over noodles with a delicious, light cream sauce with chives and other, delicate spices in the French mode. 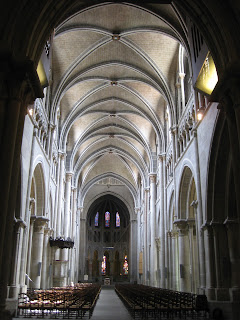 Then, she went to work and I walked over to the cathedral and sat for a while on a bench in a little park in front of it overlooking the city of Lausanne and Lac Leman beyond. Then I wandered through the cathedral, meditating on the stained-glass windows, especially some blue ones, very high up. It’s a classic gothic cathedral, built during the 12th and 13th centuries, I believe – simple but elegant. I don’t know how many of the windows are original. Those on the south side seemed to be newer (etched/painted glass?), but I’m really not sure, and didn’t see any information on the windows. The closest thing to a rose window was an odd circular window in the southern transept. There was also a huge array of organ pipes arcing over the nave just beyond the vestibule – a relatively new one, I believe. 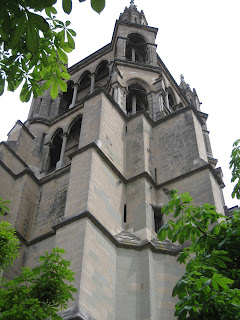 After a couple hours at the cathedral, I walked back to the museum and wandered slowly through an exhibit on evolution entitled something like: “Oh, My God by Darwin,” primarily a history of the ideas contributing to the theory of evolution, as well as evidence for the soundness of Darwin’s approach, from the ancients (Aristotle) to the present (Watson & Crick,  comparative biochemistry, etc.). 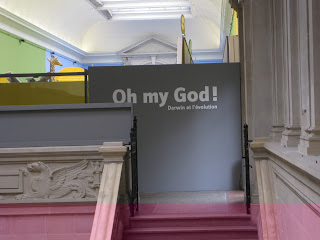 Later, on the train from Lausanne to Milano.
We are in a tunnel, now, but before that, as the clouds lifted and the day brightened, the famous Swiss mountains loomed through the train window, angling high above a green valley dotted with small houses, the bright spring green of deciduous trees climbing the sloping sides to sheer rock faces, mingling with, then giving way to the dark green of evergreens and snow still covering the top peaks and trailing down crevices. Here and there, a waterfall tumbles over a cliff in a graceful, white spray against the slate gray of bare rock. It reminds me of the thrill of my first time seeing the Swiss Alps and thinking I wanted to live there sometime. Was it during a car or bus trip that summer I worked in southern Germany (1957)?  And, of course, I thought of the year when we lived in Switzerland ('86 - '87). Although we did not have mountains visible from Basel, we took several short train rides to mountains throughout the countryside. I remember a couple, in particular, Rigi Kulm and the Jungfraujoch, that were utterly spectacular. And the green topped with jagged white also reminds me of mountains in Alaska that Dick and I saw on our R.V. trip there. 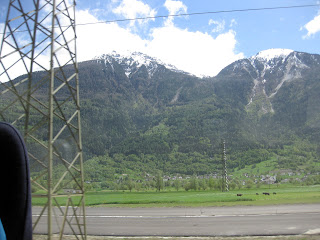 What about mountains is so emotionally compelling to me?  I don’t necessarily want to live in their midst, but I like to see them in the background. White, jagged peaks. Looking up and up and up and seeing the bright sky above snowfields buried in clouds. Lush green undulating unevenly up the mountain sides, interrupted here and there by crushed rock of an avalanche. Then looking back and back, through crevices, to a lonely glacier half buried in shadow and icy mist.
Posted by http://solowomenathomeandabroad.blogspot.com/ at 2:31 PM 3 comments:

5/04/10
I will leave early this afternoon for Milano. Mauricette has already left for work, and I am to drop the set of keys she gave me into her mailbox when I leave for the train station, which is only a block or so away. I left my large bag in a locker on the lower level of the train station. I may have to pay 16 additional francs to get it out of the locker today.
In Lausanne, I have not had much opportunity to use French during this stay. Mauricette speaks English from her year and a half in Charleston and was eager to use it with me. We went on Sunday to a luncheon with the Lausanne English-speaking club, of which she is the current president. We had a very pleasant lunch; I sat next to a woman (Gizelle) who spent several years in the U.S., spoke English very well, and seemed eager to talk. She and I had a lot in common; she is probably livelier and more extroverted than I am, but she’s another one of these women (like me), who’s probably too independent to thrive in the institution of marriage. Mauricette is a different case – retiring and actually eager for relationship, but she’s also mistrustful, and with good reason. 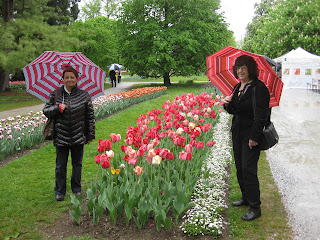 After the luncheon at Morges, Mauricette, Giselle and I wandered through the grounds of the Morges palace where a tulip festival was in full bloom – hundreds of beds of tulips (apparently 5,000 bulbs from Turkey) of many colors and forms. They were gorgeous!  The sky was misting slightly, so the others in the English-speaking club decided to go home after lunch. But I was very glad we stayed and saw the tulips. I took a lot of pictures; we’ll see if they do justice to the glory of the tulips. I read somewhere recently (and also had heard previously) that the first major world-wide financial crisis came about because of speculation on the price of tulip bulbs. Weather problems may have contributed to that financial disaster. 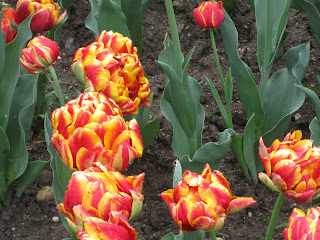 Mauricette lives in a small, three-room apartment that she has rented for years, since before she came to Charleston (January 1989). She has a regular, well-ordered life, and is working two part-time jobs: one assisting in histology and embryology at the medical school (Anatomy Department); the other teaching in the technical school for medical technologists, etc. Above her kitchen table, where we sat for most of our meals and conversations, is an enlarged photo of her as a toddler, between ages one and two, a very cute baby, but with a deeply unhappy expression on her face. 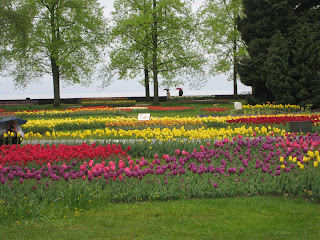 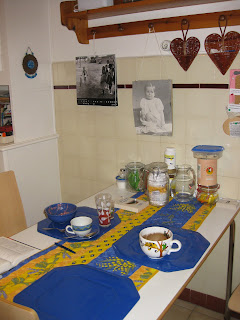 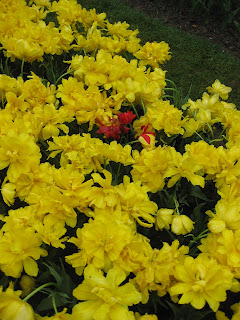 Posted by http://solowomenathomeandabroad.blogspot.com/ at 11:03 PM No comments: