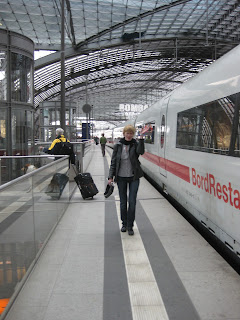 On an ICE (intercity express) train from Berlin to Basel after four days and five nights with Maria and her family in Berlin.  She handles things amazingly well – two children almost ten years apart in age, and she is nearing age 50 with a three-year-old in tow. But she still looks like she’s thirty! They have a family life that more-or-less suits everyone. Michael has a great deal of help with her logistical support and her editorial assistance, and she has an interesting and varied (and prestigious) life as the wife of a journalist who travels a good deal. She and the children go with him perhaps half the time. She also seems to get a great deal of satisfaction from her role as mother, and is great with the boys. Harry is developing into a good-natured, independent person. Gabriel is a bit whiny and demanding, but some of that is probably because he was sick when I arrived and was not completely well when I left. Maria bends and weaves gracefully to accommodate the others' whims, so it all seems to work out. 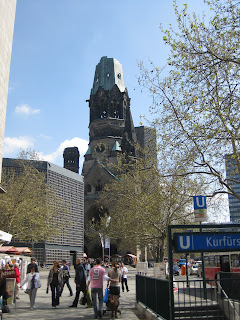 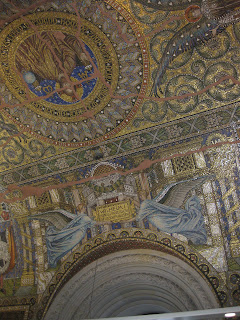 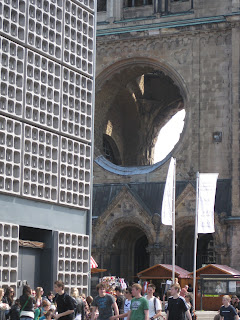 We are passing through the German countryside – mostly fields – green or brown (plowed) or yellow (rape-seed for oil?) and huge windmill farms here and there, their arms flapping lazily above the green and yellow.  Off to the left (I’m traveling backwards) is a village (Dorf) of quaint houses with steep roofs.  On the train, is a young boy, four or five years old, facing forward on a window seat next to his mother.  He’s enthralled with everything he sees out the window, and I understand essentially everything he exclaims to his mother about “gleiss” and “Kuhe,” u.s.w.  At our first stop he asks, “Steigen wir auf, jetzt?” which must be the German equivalent of “Are we there, yet?”  “Noch nicht,” says his mother, who offers him a coloring book and some colored pencils. 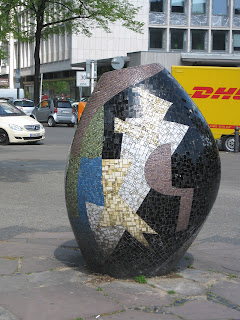 Later, the train is about to stop at Freiburg and my three elderly companions (a couple and her cousin) have left the table and will depart the train here to meet a daughter (& niece).  The train was very crowded between Kassels and Freiburg.  Young people sitting on the floor at the ends of cars, almost all the seats reserved.  I happened to snag one that was unreserved at a table where the other three seats were reserved by pleasant, low-key Germans about my age (must have been children during WWII).  This south-western part of the country is where I’ve spent most of the time I’ve lived and worked in Germany – first in a work camp near Deggingen, between Stuttgart and Ulm, in the summer of 1957, then visiting Lis in Freiburg when she was a student there in 1997, and then in Heidelberg, Kaiserslautern, and Wurzburg during my year in Europe with UMUC (2003 – 2004).
We’re far enough south now, that vineyards flank the railroad tracks.  The sky is overcast, and it has rained for the past couple of stops.  We’ll be coming to Basel, soon, but I won’t be able to spend any time there (as I hoped I might), because I need to get on to Lausanne to meet up with Mauricette, with whom I will stay a couple of days. After that, I go on to Milano.
Posted by http://solowomenathomeandabroad.blogspot.com/ at 10:56 PM 2 comments:

The Middle East in the British Museum

A very interesting and informative mini-lecture at the British Museum was on the history of the Middle East. The docent was a woman whom I had seen in that same gallery the evening of my first day in the museum, apparently giving a private tour to an American woman.  It turns out that the American woman was an old classmate who was in London briefly and wanted to see the Renaissance drawings on exhibit but couldn’t get in, and so she opted for the Mesopotamian galleries as a consolation prize. 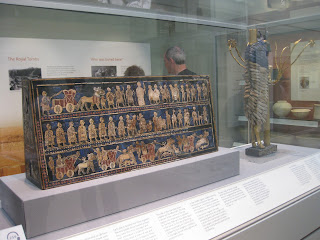 The guide was very knowledgeable and quite thorough.  She answered questions and went past her allotted time. She stayed and talked with me afterwards and gave advice on how to sequence the several galleries for optimal information.  She had puffy, blinking eyes and the air of one who likes her booze, but was competent and eager to do well and to accommodate those she was assisting.  I learned a lot. 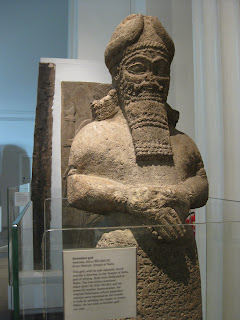 I believe I have finally got straight the sequence of the great empires in the Middle East during the first millennium BCE.  The first empire was the Assyrian, followed by the Babylonian--actually, “Neo-Babylonian,” since the first Babylon was simply a city-state, conquered by the Assyrians in the seventh century BCE. Babylon, the city, later threw off the Assyrian shackles and formed its own empire by conquest.  The Persians from the north-east (Aryans, not Semites) then conquered the Babylonians and extended the Persian Empire from India to Greece.  This must have been around the time the Indo-Aryans also penetrated the Indian sub-continent. 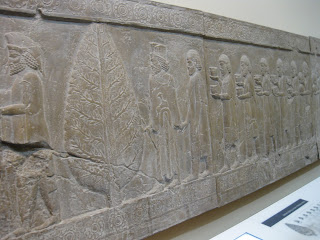 Bringing tribute to a Persian ruler


The Persians were then conquered by the Greeks about 330 BCE under Alexander the Great, which “Greek Empire” disintegrated almost immediately upon Alexander’s death. But the Hellenization persisted and was appropriated by the Romans as they conquered many former Greek territories during the first centuries BCE and CE, particularly in the Near East and Egypt, as well as much of the territory surrounding the Mediterranean Sea west of Italy. 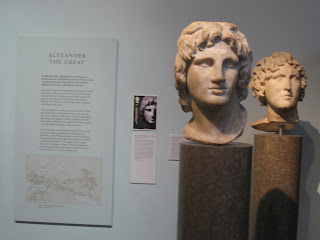 
The guide focused on trade and the development of writing as key forces undergirding the formation of empires.  The writing and numbers essential for trade began with tokens in little clay bolles, followed by clay tablets with numbers inscribed on them ( a chevron was 10, and a filled-in circle was 60).  This let to pictograms and then to the alphabet, first developed by Phoenician traders.  Trade, numbers, and writing developed pari-passu.
The last talk I went to was one on money, my third afternoon in the museum.  Again, like writing, money developed from the needs of trade and communication between cultures.  Apparently, the Lydians were the first to use metallic coins (they had a lot of mineable electrum – a gold-silver alloy).  The Chinese, who invented paper, were the first to use paper money, when the coins (“cash”) became too heavy to carry in large quantities.
The train is getting close to Berlin now, but we’re still passing through fields of green and brown. White birds glided over a recently plowed field (near Hanover), looking for what?  Seeds? Unearthed invertebrates for food? Maybe both.  Another field, nearer Berlin, was populated with hundreds of huge, three-bladed windmills flapping lazily and effortlessly, generating electricity for the nearby countryside and beyond.
Posted by http://solowomenathomeandabroad.blogspot.com/ at 7:45 PM No comments:

Trainride Reflections on the British Museum 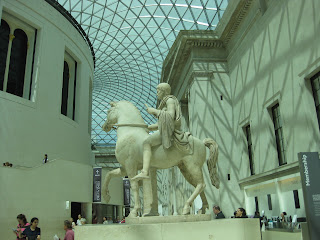 On the train to Berlin, my mind wanders back to the British Museum.  During the days spent there, I took several of the Augenblick tours (what were they called?) – 20 to 40 minute mini-tours with commentary. These were overviews of a particular topic, illustrated by selected artifacts in the collection.  The first was about the Gods and Goddesses of Roman Britain, very interesting.  Julius Caesar was the first of the Roman generals to land on the island of Britain (a little before 50 BCE),  and he apparently set up a camp/trading colony there.  Hadrian was the emperor/general who actually conquered Britain more than a century and a half later, but Roman coins and other artifacts were deposited (or left around) in the interim and later found by archeologists.  The two main gods of the time and place were Mars (not surprising, since most of the Romans garrisoned there were military men) and Minerva, who apparently shared many attributes with a Celtic goddess (Morrigan) with whom she became conflated.  Christian symbols (Constantine’s cross) began to show up in the 4th century.
The second mini-tour I took at the British Museum was in the Enlightenment Gallery, a very long hall with shelves and cabinets on both sides, and display cases in the central area.  This contains much of the earliest, original collection of the museum, donated by wealthy benefactors (including George III) from personal collections of curiosities and treasures brought back to England after world explorations during the 18th and 19th centuries.  Viewing this eclectic plethora of mostly human artifacts, all collected together in one spot, seemed at once unifying (harmonious) and improbably diverse (dissonant).  Human attempts to understand and to produce esthetic treasures that have significance and that will endure defy any explanation that might be culturally comprehensive.  The mini-lecture was done by a woman (they were all volunteers and mostly women) who was originally East Indian, I believe.  She tried to focus on women’s contribution to the Enlightenment, including the story of Mary Anning, who excavated fossils near her home by the sea and sold them to collectors.  She apparently found the first ichthyosaurus fossil and sold it to the British Mseum (through an intermediary?).  According to our guide, she was the original subject of the “she sells seashells by the seashore” tongue-twister that all English-speaking children learn when they are young. 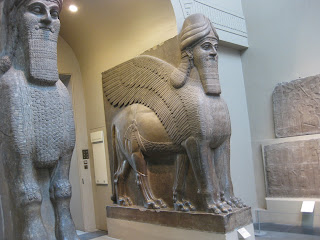 Another talk I attended was on the Assyrian friezes, a marvelous collection lining a couple of long hallways on the first floor of the museum flanked by beasts with human heads.  I had already walked through one of them (Ashurnasirpal’s) and read all the commentary, but I learned a lot from the mini-lecture, including the idea that wings on a form indicated a spiritual protector.  This is obviously where our ideas of angels come from.  I learned that Shamash, the sun god, was a disc with wings (a symbol that shows up with Apllo, also, I believe). Astarte was the planet Venus (symbol = star/flower), and Sin was god of the moon, symbolized by the crescent.  So the Muslims worship the moon, also, although they probably don’t realize it. In the friezes, one can identify kings by their “horned” hats (helmets, crowns) and eunuchs by their lack of beards. 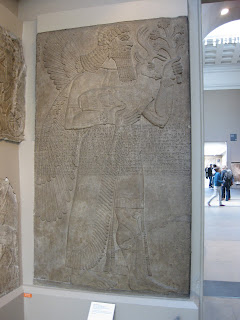 Posted by http://solowomenathomeandabroad.blogspot.com/ at 5:03 PM No comments: