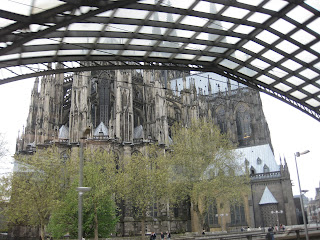 In the railway station at Koln (Cologne, Germany), waiting to catch a train to Berlin, the spires of the magnificent Koln cathedral visible through gratings of windows above the tracks and platforms.  The arch covering the platforms forms an echo chamber. Announcements, and the rumblings and hissing and grinding of trains coming and going, blend into a cacophony that waxes and wanes in intensity, drowning out the intermittent conversation of passing passengers and the queries of a couple of people who approached me – one asking for money, her hand held out (I responded in French:  “Je n’en ai”), the other, I’m not sure what he was asking for, but I heard “Fahrkarte,” and I waved my hands, shook my head and said “Ich weiss nicht.”
I’m finding that my German seems to be as good as French these days.  I spoke French with a Belgian woman on the train from Brussels to Koln yesterday, but it felt more awkward than the conversation last evening in German with the clerk at the Ibis Hotel.  In fact, when I was filling out the registration info, I asked if he needed my passport number and he said no, but when he saw I was from the U.S., he said yes, he did need it. He must have thought I was German!  I was surprised and told him I had spent a year in Germany a few years back.  It all came very naturally in that language.
I woke up late this morning – about quarter to ten, and almost missed the Fruhstuch (breakfast) that I had paid for the night before. I’ve activated the Eurail pass, so this is the first of my potential six days of pre-paid train travel.  As soon as I am settled on the train, I will call my daughter in Berlin.

It looks like a Turkish family next to me here on the quay – three boys and two girls with their parents – the father chain-smoking, the children mostly dark-haired and round-faced, although one of the girls has brownish hair.
As we departed, the train passed in front of the marvelous Koln cathedral, once brilliant white, now graying with soot and grit.  Scaffolding formed a web-work on the tower; perhaps it is being cleaned. The last time I was in Koln, the cathedral as I remember it was quite white, or at least a light stone-gray.  I climbed the tower then and looked at the surrounding countryside through the tower’s stone lacework.  I remember seeing a spider in its web, high up in the tower, and wondering how it came to be there, feeling amazed at its courage and tenacity in the winds that blow through the tower.
That was the beginning of a trip by boat down the Rhine to Basel, I believe.  I don’t remember if I did that after a Histochemical Society meeting in Antwerp or prior to the beginning of the sabbatical year in Switzerland.  Were they both the same year?  I probably had a Eurail pass then, too – one that allowed travel on Rhine ships as well.  I remember the feeling of joy then, in Koln.

The sight of the cathedral last night, next to the railway station and hotel, gave me another jolt of joy, although when I saw her initially, she was a dark, grimy, towering presence, huge and overwhelming, almost forbidding, like an other-worldly presence against the light-gray background clouds of late dusk. 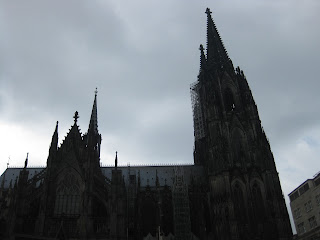 New morning:
The sun is now out; the countryside is very green; little Dorfs (villages) line the railroad tracks at 5 – 10 minute intervals.  The houses, single, double, triple, their roofs forming a saw-tooth pattern against the sky, seem to have gardens lining the railroad tracks, as I used to see in Russia.  I'm amazed at how much graffiti there is here in Germany – covering the sides of commercial buildings and splashed along the struts of railway overpasses.
Posted by http://solowomenathomeandabroad.blogspot.com/ at 7:37 AM 2 comments:

Train to the Continent 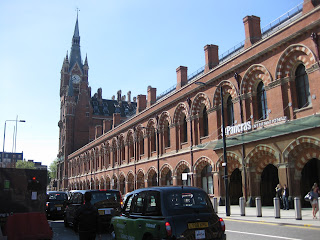 Sunday morning, St. Pancras railway station. My train is scheduled to leave in an hour and a half.  I nearly got the departure time wrong, but checked at the ticket sales counter and straightened it out.  Good thing, too; I might have missed my train!  What an awful beginning to the European leg of my journey that could have been.  People-watching at the station is marvelous!  So many stories to watch as they play out, I hardly want to write.  Is it a spider that looks like a hairball or a hairball that looks like a spider skittering across this mottled floor?
Later.  I’m in the “waiting room” – through check-in at the train station – and find that my train has been cancelled.  Apparently, the one I was scheduled to take was one of those “add-ons” because of the volcano and the air traffic disruption, and it has now been cancelled.  But without telling anyone.  Even when I stopped at the ticket office to check on departure and arrival times, the clerk at the counter did not tell me the train had been cancelled.  If I had actually checked in earlier (instead of sitting out on the concourse people-watching and journal-writing), I might have made the earlier train, which was just leaving as I walked through the check-in gates.  The trains – at least the international ones here in London – have a baggage-screening process quite similar to that for airlines, except you don’t to have to take off your shoes.  And they must be willing to pass a Swiss-army knife, because I have one in my tummy pack.
14:35. Now on the train to Brussels, and from there, I hope it’s an easy transfer to Koln.  I’ll apparently arrive after 9:00 PM, and will have to stay the night in Koln.  We’ll see what’s available there when I arrive.
The train is passing through the green English countryside: rolling hills and vast expanses of fields and pastures, sheep grazing in some of them, and now cows.  A town, almost all newly built – townhouses squeezed together with tall, pointed roofs. Now we pass a huge power station.  Trees and bushes brushed with shades of green, yellow, and orange, some trees laden with white blossoms.  It’s amazing to see this extensive, thinly-populated countryside after the human density of London.
The train has passed through a long tunnel to Calais (France).  Two military men with guns (rifles?) pointed downward stood on each end of the quay, reminding me of one of the chief differences between travel in the present and in the past (before 9/11/2001). Then travelers were expected to be ordinary people, not terrorists intent on disrupting a foreign (read feared and despised) culture that they could not – and would not try to – understand. If the 20th century can be considered the century of World Wars and the Cold War, this 21st century may be viewed by history as the century of Global Terror and Terrorists.
Fields, some green and some brown, are visible above the whitish limestone gravel along the railway embankment.  Again, mostly empty fields, although here and there a canal – for barges or irrigation – reflects the sun with a silver glint.
Posted by http://solowomenathomeandabroad.blogspot.com/ at 10:53 AM 2 comments: