5/09/10, continued
On Saturday morning, I went over to Guido’s after breakfast. Patrizia was at work (half day), and Guido was taking care of the children. I played race cars with Ricardo and watched Veronica do her cute little three-year-old show-off routine – dancing, playing piano, etc. Then Guido made pasta (pesto) for us for lunch and Veronica had a bit of a tantrum toward the end of it, but she had been quite good and sociable all morning. Patrizia came home and Veronica had a nap and I got online. It was a good thing, too, because I had a message from a person in the closing section of Community First Bank asking for more information with my signature. This relates to the house I'm trying to buy this summer. Briana has power-of-attorney, and will sign for me at the closing, but it has all been much more complicated than I'd hoped it would be. I was able to print out the e-mail at Guido’s and later (Monday, in Marseilles) faxed it to the person with signatures. 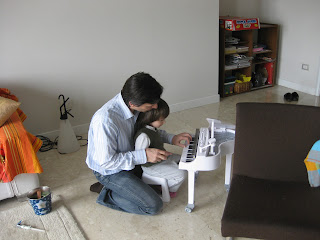 After Veronica awakened from her nap that afternoon, the whole family went for a walk in a nearby park. Riccardo used his gun with plastic pellets to shoot at ducks and posts and imaginary beasts. Veronica ran around and played on a swing set and slides, accompanied always by her mother. And Guido and I walked slowly along the pathways or sat on a bench, and he talked about his situation at work, with which he is dissatisfied, but which he doesn’t see a way to improve without changing companies, maybe moving to another city or even to another country, which he also doesn’t want to do, in order to feel creative and valued. I understand that situation, having been there myself. His solution will probably have to be different from mine, partly because he’s a man, partly because he’s younger than I was when I went through that apparent impasse. It’s tough. 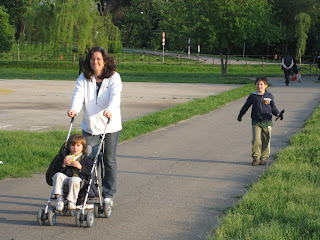 In the evening on Saturday was a big birthday party for Marco, Guido’s brother. I stayed a day longer in Milano than I had originally intended so that I could spend some time with Guido and his family on Saturday. Thus, I was there for the family event, feeling a bit like a party crasher. The whole family was there, and Rosanna cooked a large dinner of lamb shanks and pasta and multiple hors d’oeuvres and appetizers. Her food is always very tasty. Gianni and Rosanna and their two boys, Guido and Marco, now themselves, paterfamilias, altogether created an experience of the intensity and importance of Italian family life, both in its best sense of support, and pleasure, and meaning found in one-another’s company, and in its rather stressful aspect of dissonance and chaos. 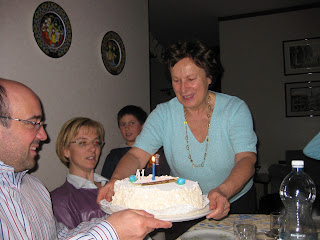 This morning (Sunday) I take the train for Marseilles. I’m packed and ready to go, but Gianni and Rosanna are still in bed after a long day yesterday and the big party last evening. Marco, Guido’s brother is now 41 and Guido is now 44 years old, I believe. So it has been nearly 27 years since he came to Charleston as a foreign-exchange student. He’s now married and has two children – Riccardo and Veronica – and a pretty good job, but one he doesn’t like so well because he has poor rapport with his boss. It was good to have another long talk yesterday, as we used to do all those many years ago. That probably won’t be repeated, though.
Posted by http://solowomenathomeandabroad.blogspot.com/ at 12:52 PM 2 comments:


On Friday, Rosanna decided that we needed to go to Monza in the morning.  It is a village, not far away from Brugherio, where Patrizia works (teaches school).  It is also the location of a summer palace (Villa Reale or Royal Villa) of the Austrian nobility that controlled the region of Milan for a couple of centuries.  The following day was to be the opening of a Rose Exhibit in a part of the formal gardens, but the weather has been so cold that very few of the roses were blooming.  There is also a very large park nearby (Monza Park) which is apparently one of the largest public parks in the country.  Then we had an elegant “snack” (small puff pastries with meat and cheese fillings, olives, nuts, crispy, seasoned breads) and tea. 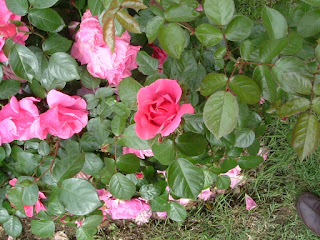 Friday afternoon, Rosanna, Gianni, Guido, Patrizia and I all drove into Milano in Guido’s car, in order to see Leonardo da Vinci’s Last Supper, for which Gianni had made reservations. It is in a modest church, Santa Maria delle Grazie, with a lovely cloister area where we waited for our time to enter.

I had seen the Last Supper once before (during the sabbatical year in Switzerland) and we didn’t need a reservation then. I remembered the space being smaller and darker with the cloister more accessible.  This time, about 20 people were herded into a spacious, softly lit room, with DaVinci’s mural on one end and a mural by Giovanni Donatto da Montorfano on the other.  The DaVinci mural has been “restored,” which is to say that it does not seem to be flaking from the wall. However, the colors seem more muted than I expected or remembered them to be. It was fairly easy to pick out Judas among the disciples.  The others were not so clear.  One looked like a woman, but it turned out to be John (the gospel writer). It was good to see the da Vinci again, and this time restored.

﻿
The painting by Donatto, was an elaborate, skilled, and richly colored rendering of the Crucifixion, and I actually spent more time viewing that than I did the Last Supper; there were fewer people crowded around it. Of course, photos were forbidden.

Posted by http://solowomenathomeandabroad.blogspot.com/ at 11:54 PM No comments:


In the afternoon of that first day in Milano (Wednesday), we had a nice lunch of onion soup in a restaurant in the Galeria Victor Emmanuel (the world’s first shopping mall, I believe), and then went to La Scala, where I had a glimpse of the fully lit loges facing a horseshoe, the stage in front and the flat parterre beneath. Then they closed the viewing loges and darkened the theater for a rehearsal (something Wagnerian, it seemed). We then visited the museum there, an intriguing collection of portraits and statues and mementos, and even plaster hand casts and death masks of famous composers and musicians and performers of La Scala’s illustrious past. One almost feels the passions and intrigue of the artists and managers in their portraits and in the artifacts they left behind in this powerfully iconic building.

After visiting La Scala, we went to a small church with a very interesting perspective effect of inlaid marble in the apse. From the entrance, looking down the nave, the apse seemed 20 or 30 feet deep, but if one walked up toward the front, it was clear that the apse was no more than about a meter deep, and that the effect had been achieved with the clear use of perspective. I don't seem to have taken any photos of that - perhaps it was too dark inside the church.
That evening, Guido and his family came over for dinner at his parents’ home, a very pleasant evening. Ricardo came up to me and spoke a few words in English. It was clear that Patrizia and Guido love each other, that she’s a good mother, and that he loves the innocence of his children.
The following day, Thursday, Gianni, Rosanna and I went back to Milano, again by metro, and visited the medieval university of the city. We ate lunch (I had a large, very nice tuna salad) in an open-air café in front of a church near the Place Giuseppi Misouri. He was a general in Ghiribaldi’s army, and his commemorative statue shows him riding on a very tired horse. Afterwards, we went to a jewel of a museum housed in an old palace with a lovely little courtyard, of which the core collection was early Renaissance paintings and ancient manuscripts from throughout the civilized world of the Middle Ages. 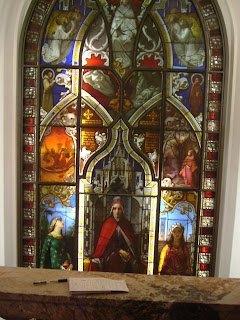 That evening, the whole family got together at a very nice restaurant in the town of Bordigheria.  Rosanna said we would be “seeing the night life of Bordigheria,” a sleepy suburb of Milano, not far from the high-rise apartment complex where they live. Nonetheless, the meal was superb and the company (all family, including children) was lively and engaging.
Posted by http://solowomenathomeandabroad.blogspot.com/ at 3:55 PM 2 comments: