Wednesday, May 19 – the next-to-last day of the tour. We traveled by bus to several towns around Toulouse.


The first stop was Lavaur, where we visited the Cathedral Saint-Alain, an impressive, southern gothic structure (13th – 16th centuries) set in a broad green lawn with formal gardens. The interior was probably the most elaborately decorated of those I have seen: painted walls, elaborate ceiling decorations, pulpit highlighted with gold leaf, and marble panels.
The great organ was a Cavaille-Coll, restored in the late 20th century. It has a good, powerful sound. The choir organ has not been renovated and doesn’t work.

Also in the town of Lavaur was the Eglise Saint-Francois, again constructed between the 13th and 16th centuries. Dwellings and shops crowded its walls from all sides.


Internally, it seemed (to me) too elaborate for a Franciscan church, St. Francis being the model (next to Jesus) of unpretentious simplicity.
The organ, built by Puget in the late 19th century, was restored early this century. The organ had a nice, light tone that was marred, particularly in softer sections, by the sound of nearby construction.

After lunch, we visited Castelnau d’Estretefonds and the Eglise Saint-Martin. The church dates from the 16th century, but the beautifully preserved, painted interior was accomplished during the late 19th century.  The organ is a Cavaille-Coll finished in the late 19th century and recently restored. The organ had a nice sound, with unusual bell tones.


Our final stop of the day was Verdun-sur-Garonne, where we visited the Eglise Saint-Michel.
The painted interior is a stunning blue with religious images in the spandrels of ceiling arches. An almost life-sized statue of St. Michael was killing a dragon (I thought it was St. George who killed the dragon).The organ was a 18th baroque century baroque jewel by J.-F. Lepine, restored in the 20th century, is nearly in the same condition as when it was built. 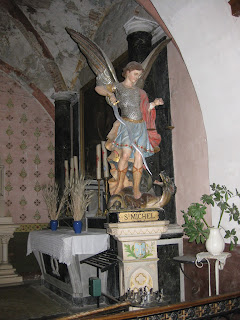 Posted by http://solowomenathomeandabroad.blogspot.com/ at 9:16 PM No comments: