The Holidays are upon us, and I expected to be in Tennessee by now. That hasn’t happened because the long-term care facility in Nolensville is not yet finished! I’m just as happy not to be moving in the middle of winter when everything is dark and cold. The new estimate will be around the first week of March. That offers some reprieve for me to enjoy the holidays – and to continue at the slower pace I’ve adopted in my eighties. Still, I’m looking forward to being near daughter Elisabeth and her family in the spring!

This has been a full, busy, and often difficult year, with ongoing efforts to whittle down possessions in preparation for the move to Tennessee. Grandson Blake came to Charleston twice this year to help me sort, toss, and move two small U-Haul loads to a storage unit in Nolensville.

I’ve been giving away furniture and books and bookcases, as well as some treasures collected on overseas trips. And I’ve perused boxes and boxes of mementos and thrown away most of the stuff in them.

There are still many photo albums and a few boxes of correspondence to distill. And I’ve sorted through all my books. Those still in the house (or storage) are ones I plan to take to Traditions, the long-term care facility in Nolensville. Now I need to arrange for a moving company to haul it all there - when the place is ready.

Long-time friends have been my mainstay during this unsettled time. Women I've been getting together with monthly over dinner still offer support and friendship. Thanks especially to Ellie Setser, who arranged a birthday party for me at our November women's dinner!

Mary Johnston, an editor and very fine person, who has led a productive writers' group for the past decade, threw a good-bye party for me at the beginning of summer. Friends from church and women's groups - as well as other writers - all attended a great party at a beautiful home downtown! Thank you to all my fellow writers for encouragement and suggestions down through the years, and to other friends, many of them UUs, for helping to keep me as sane as possible - and for buying some of my books!


The children – and their children – are all doing pretty well. Briana has had problems with some of her joints, making work at the post-office difficult and often painful, although she’s being stoic. Blake is in his last year at Northland College in Ashland, WI, and he plans to graduate at the end of next semester!
Maria has been writing successfully. Harry is spending his junior college year at Oxford, in England. He will come home to New York for the holidays.
And Elisabeth’s family is doing well, although the younger children have been sick enough to miss some school this fall. Judson is looking forward to graduating high school next year. He will be going to college in the fall, and he plans to study physics! 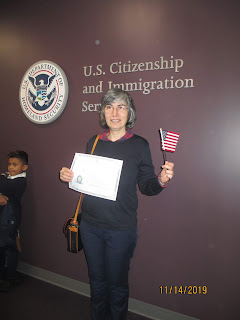 It's been a very social year, including frequent get-togethers with friends, mostly women I've known for decades at the UU Church and at MUSC.

And I had the privilege of attending my first immigration and naturalization service with the citizenship ceremony of Maryam Nadieri, Will Moredock's widow.

I’ve also had some happy/sad good-bye lunches and dinners with friends. And there have been a few funeral services, including those at the UU Church for long-time friends, Will Moredock and Dottie Klintworth - truly sad and sobering.

In the midst of sorting and moving and saying goodbyes, writing efforts have almost stalled. However, with the help of Mary's writers’ group, the book about a 1992 summer in Siberia – and from there to western (“civilized”) Russia – is now in first draft form. Still a long way to go before that one is finished, however. And there's so much more I want to do before...

Wishing you a Wonderful Holiday Season and a Very Happy New Year!!


Posted by http://solowomenathomeandabroad.blogspot.com/ at 3:10 PM